In short breaks off Running the Rat Race and the Work experience project, I found my stress release through improving my drawing ability. With the desire to combine two scripts I had written in second year, The Pitiful Fruit of the Maternal Banquet and The Johnson Family, into my debut diptych-narrative feature film, I felt that all of my drawing practice could be turned into a speculative project, taking a holistic approach to all aspects of design on both screenplays.

The idea of this project was to take a speculative approach to the pre-production, creating a ‘Pitch Package’ to present to Studio Executives / Producers for funding. The project enabled me to engage more with contemporary performance and practice, where I studied the output of TSG Entertainment and New Line Cinema studios. This project, although idealistic, enabled me to think in terms of creativity within budgetary restrictions, being resourceful and making choices about creative compromise.

I began this speculative project by researching the output of contemporary studios, in order to find out which studio would best suit my film to pitch to. The four main studios I narrowed it down to, were Canal+, A24, Sony Pictures Classics, TSG Entertainment and New Line Cinema. In my research, I found that the majority of contemporary performance and film practice produced by Independent cinema’s, like A24 were all social documentary pieces, such as Uncut Gems (Safdie, 2020) and Nomadland (Zhao, 2020), which had very little design aspects. These films capture a realism, where the stories are told from a  literal perspective. Although I am aware that these films are what is currently popular, ‘in’, winning all the awards and being sold at the Film markets, I prefer to work on a more metaphorical level, incorporating influences from Surrealism and elaborate design, which effectively goes against the mould in contemporary performance and practice.

However, as my screenplays were highly designed, I felt the projects would best suit TSG Entertainment and New Line Cinema, who are responsible for producing many of the films that influenced my short film Running the Rat Race, including Tarsem Singh’s The Cell (2000), the works of Tony Kaye, John Waters, Guillermo del Toro’s Pan’s Labyrinth (2006), and possibly my all-time favourite film Storytelling (2001) by Todd Solondz and more highly designed contemporary classics The Shape of Water (Del Toro, 2017), Jojo Rabbit (Waititi, 2019) and It (Muschietti, 2017).

In order to calculate a budget tailored for my own project, I took a mean average of all the film’s listed above and found a total figure of £18.2 Million 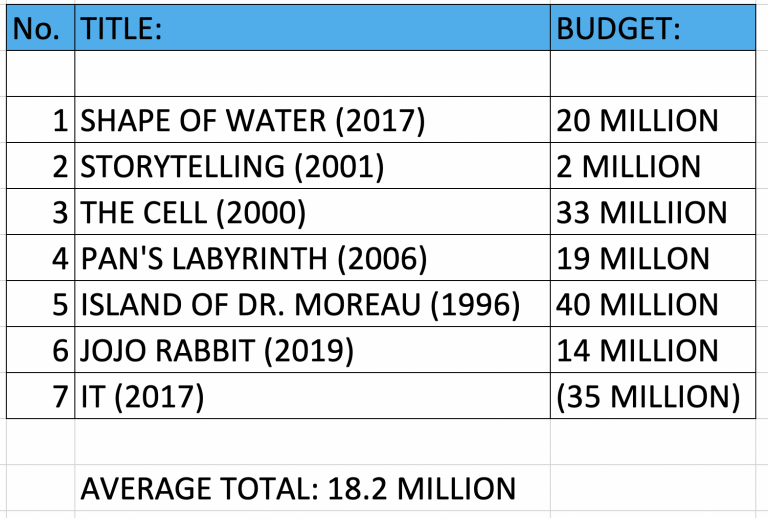 To learn about New Line Cinema and TSG Entertainment, I researched into the documentary Lost Soul: The Doomed Journey of Richard Stanley’s Island of Dr. Moreau (Gregory, 2014) and had a telephone interview with Tarsem Singh, director of New Line Cinema’s The Cell.

Although the production of Richard Stanley’s Island of Dr Moreau (Stanley, Frankenheimer, 1996), was a complete disaster, I was fascinated that a production company like New Line Cinema would take such a big leap of faith on a niche auteur director like Richard Stanley. It seemed that many of the films produced by New Line Studios were made out of a leap of faith.

Although Tony Kaye and Tarsem Singh had established themselves as Commercial’s directors, it was New Line Cinema that produced their debut feature films.

After research, I broke the scripts down into mood boards, Character profiles and created a brief synopsis of each story.

The John$on Family is ‘a day in the life of’ story, with Surrealist twist. The film satirises modern day consumerism, in which The Johnson family are immersed by technology. Through absurdist humour, the family speak in their own computerised dialect and are seen literally consuming technology that vaguely resembles real food, i.e. Egg shaped mini speakers, Television cable noodles and pre-sliced Floppy disk bread. The family have a pet television on wheels and a baby who is breast fed by her mother’s USB shaped nipple.

The second script, The Pitiful Fruit of the Maternal Banquet, delves into themes of trauma, analysing the how societal oppression against individuality may lead to radicalisation. Once every nine months, three women, who are in their final month of pregnancy, get together to have a tea party. Having attended school together, the three women reflect on their childhood, re-enacting scenes of past trauma in a masochistic manner. Spending the day performing strange activities, the women happen to give birth all together and prepare a three course dinner from questionable and grotesque ingredients. The film further reflects on the flaws of the British approach to early school education, in which the arts are being defunded by the government, figure headed by characters like Michael Gove.

Through these scripts and the medium of film, I aim to raise awareness of conformity, be it through the societal consumeristic values or, the rigid environment of early education that stifles the arts.

The societal impact of film is undeniable, with philosophers, such as Gilles Deleuze citing in Cinema 1: The Movement Image (Deleuze, 1983), that the combination of philosophy through film can create an atmosphere for thought and provoke social change.

In a transcription of a lecture Deleuze gave in May 1987, published in ‘Deleuze & Guattari: New Mappings in Politics, Philosophy, and Culture, (Kaufman and K.J. Heller, 1998), Deleuze states,

‘There is no work of art that does not appeal to a people who do not yet exist.’

Effectively, Deleuze comments that art opens ways in which future spectators may experience the world, works of art appeal to a people in the process of coming, works of art are always ahead of time.

‘it is only as an aesthetic phenomenon that existence and the world are eternally justified’ He continues, ‘Art for art’s sake – a worm chasing its own tail….A psychologist, on the other hand, asks: what does all art do? does it not praise? glorify? choose? prefer?’

Analysing this quote, life is made human, worth living, only by art – that is to say, in the largest sense, by human’s power to create an order amongst disorder, finding meaning where nature itself does not supply one.

In order to reflect these themes, I created the following mood boards and character profiles: 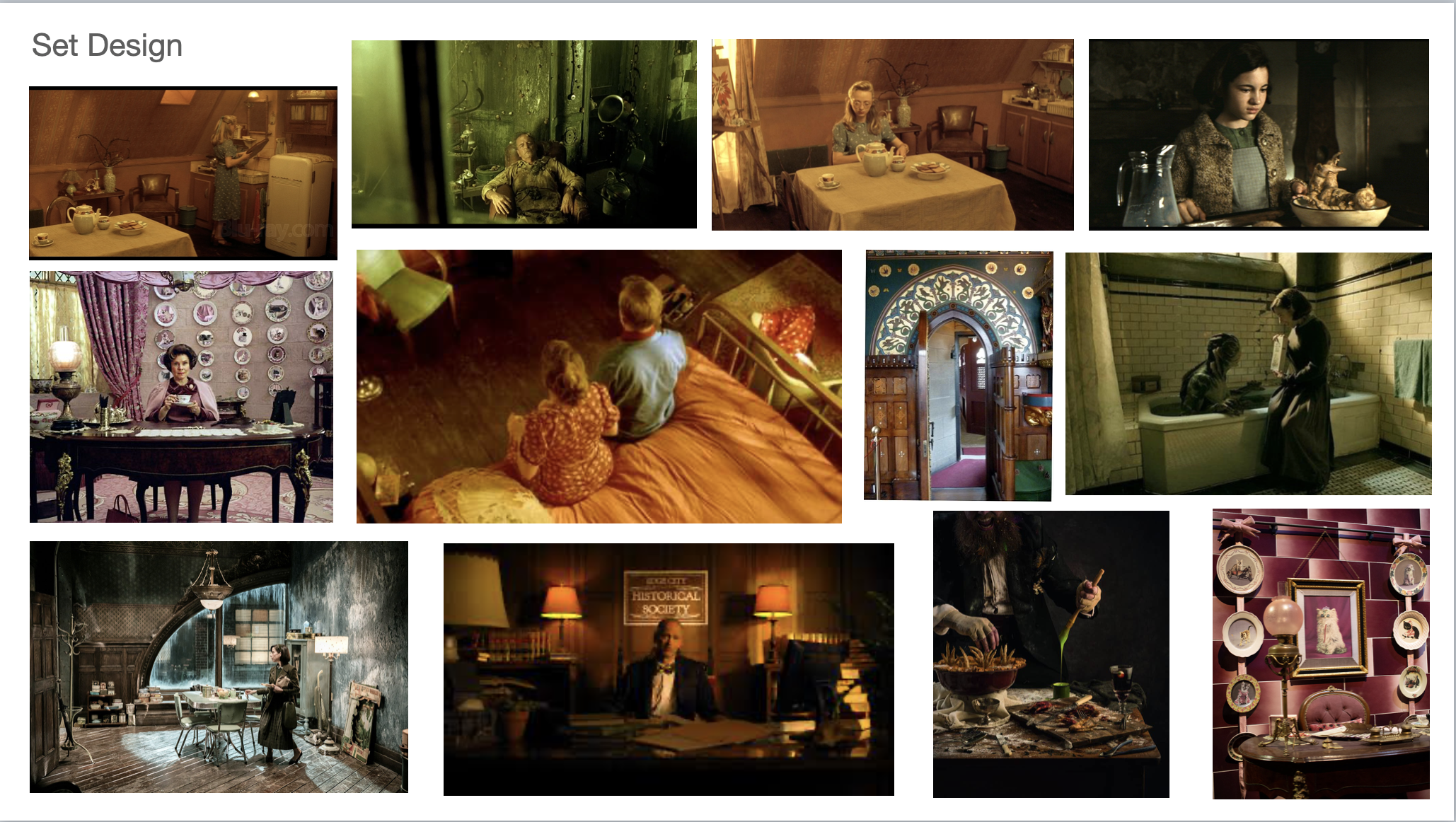 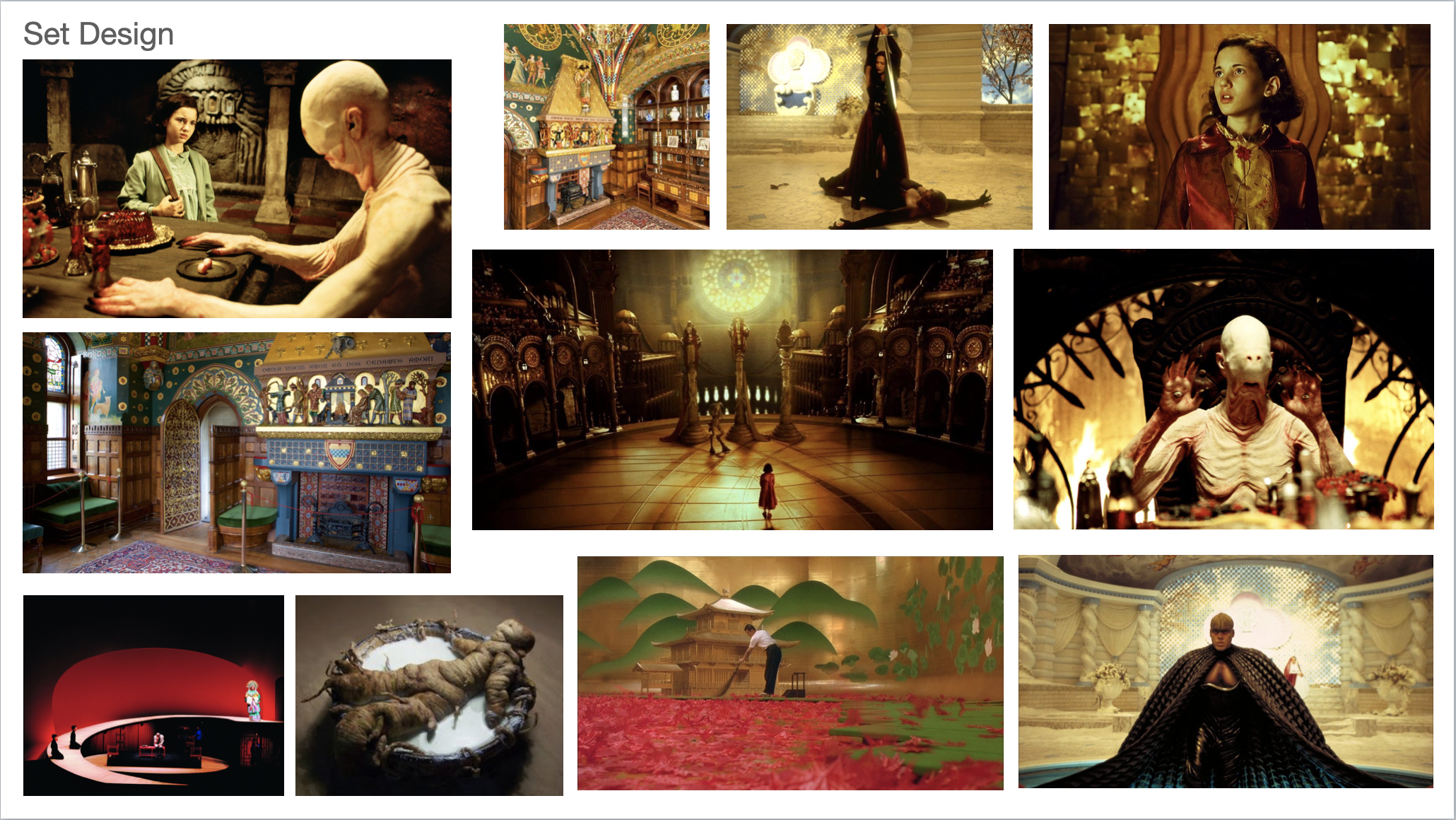 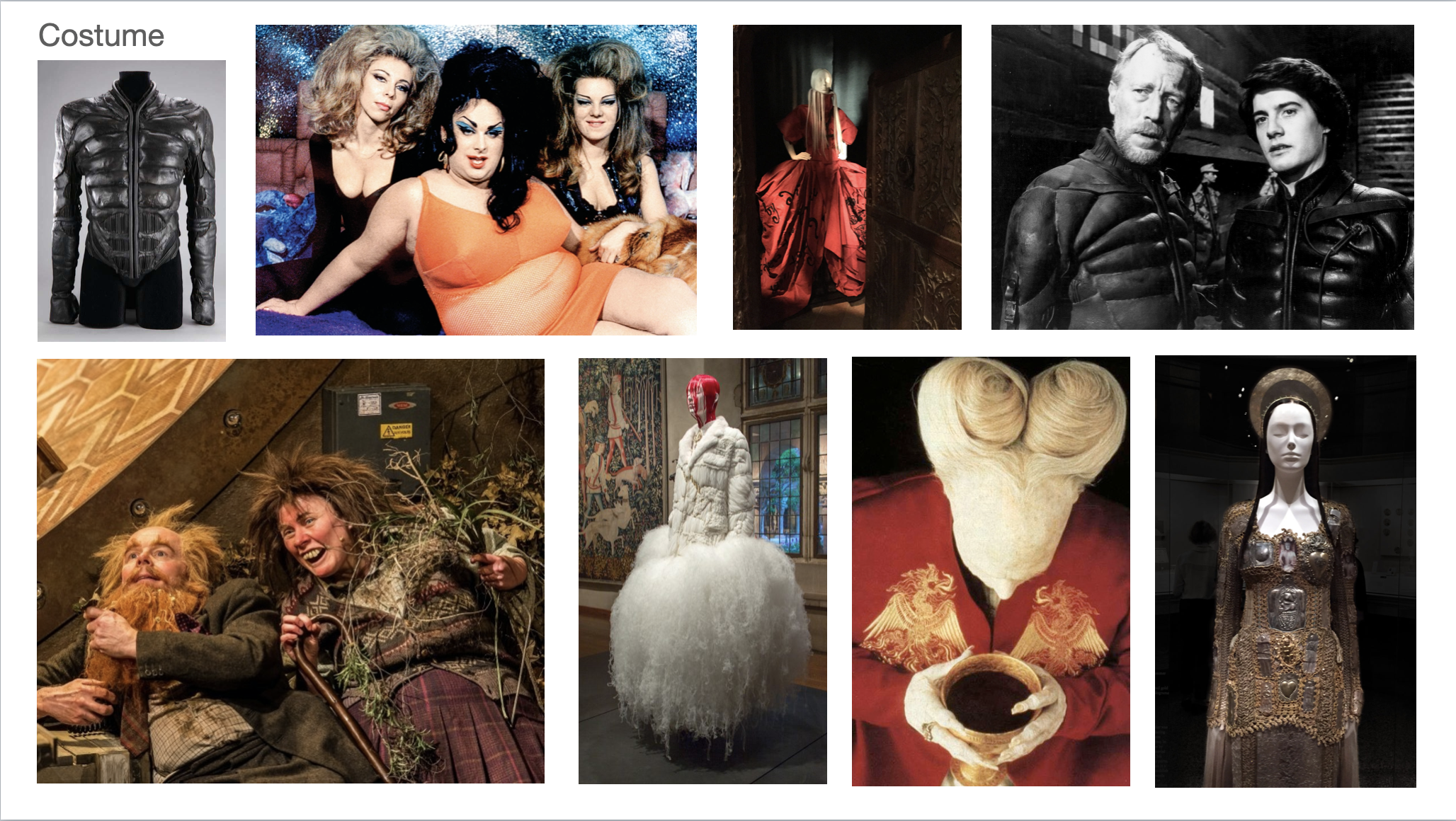 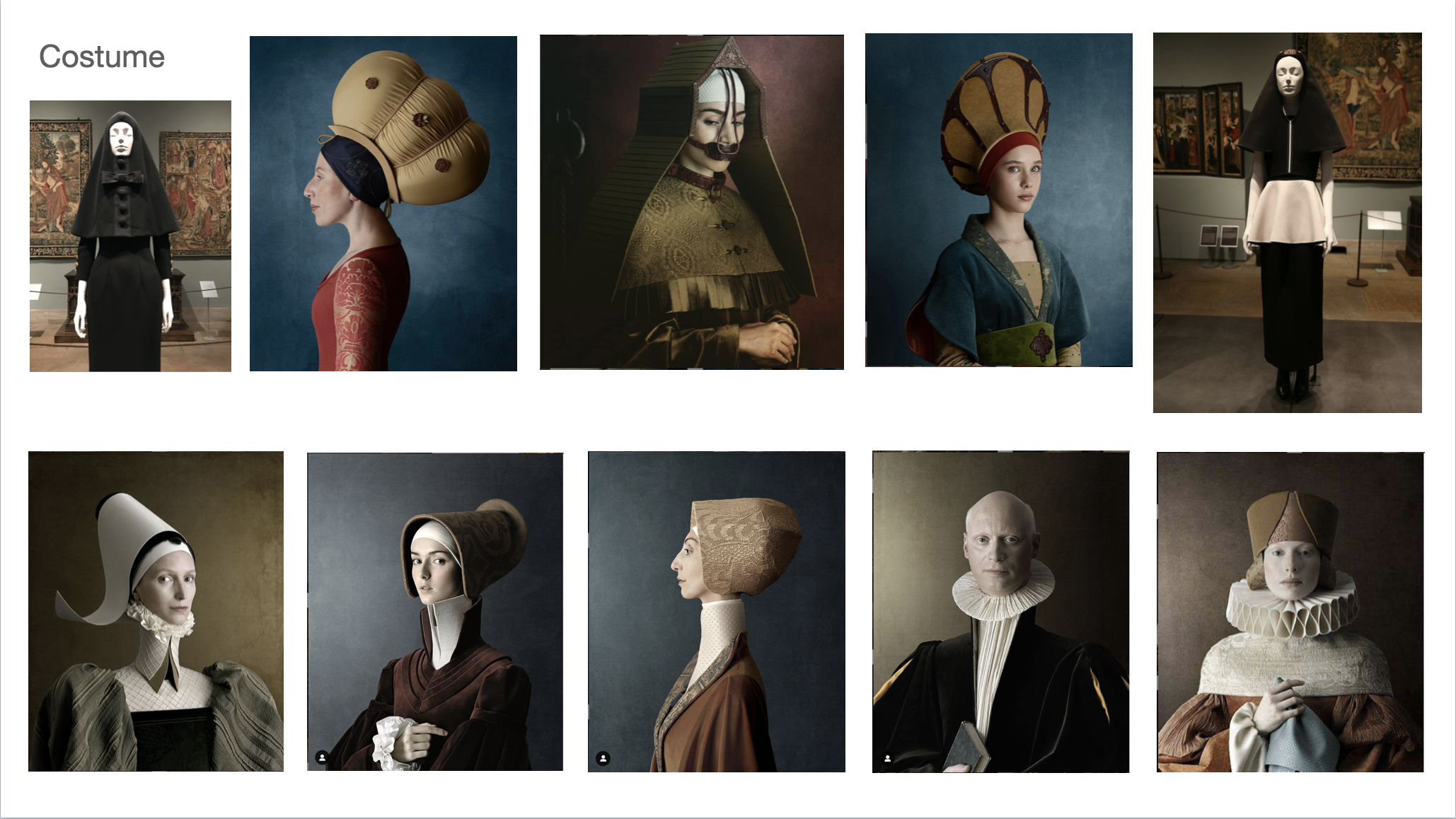 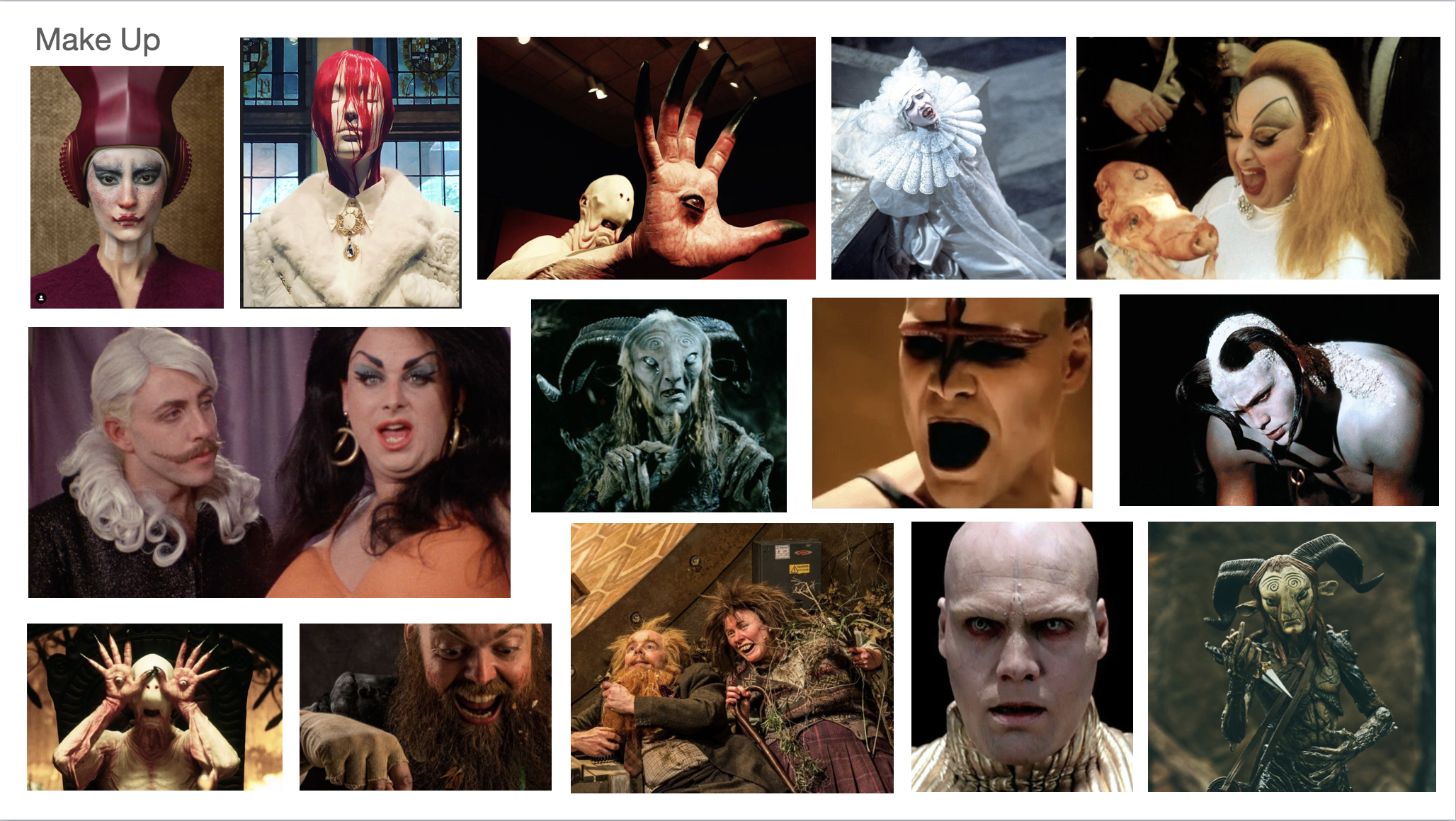 Much of my research was informed by the films of New Line Cinema. To convey the themes of individuality and juxtapose conformity, I was inspired by contemporary classics, New Line Cinema’s Pan’s Labyrinth (Del Toro, 2006) and TSG Entertainment’s The Shape of Water (Del Toro, 2017), where Guillermo Del Toro uses intricate design with a rich colour palette to reflect both beauty and disgust. It places the audience into a discomforting position, as the set design uses familiar, warm, saturated autumnal tones of reds and browns, but juxtaposes it with the choice of disturbing props and unsettling prosthetic effects. Equally, both The John$on Family and The Pitiful Fruit of the Maternal Banquet, form the mid-ground between beauty and disgust. The characters all surround themselves in elaborate environments, yet are driven by disgust, deriving their pleasures by performing nauseating acts. Therefore, like Pan’s Labyrinth and The Shape of Water, I felt that a warm, autumnal colour palette would best suit the Set Design, working as an unsettling juxtaposition of the character’s motives.

For the costumes, I took design inspiration from Eiko Ishioka’s portfolio and work on New Line Cinema’s modern day masterpiece The Cell (Singh, 2000), which speaks for itself. To convey the themes of creative individuality in The Pitiful Fruit of the Maternal Banquet, I think there is no better point of reference than Eiko’s work, which challenges conventions through its choice of bold textures, colour and sculptural nature.

With these references, I began my process of designing and adopted a multitude of drawing styles, in order to ‘find my voice’ and challenge my skills.

As all aspects of design are considered ‘below the line’ production costs, meaning, they are all less than 10% costs.

In order to calculate a budget for the sets, I contacted out to the Construction manager, Callum Andrews who informed me that for a Set of my designs, it would cost approximately £2,500,000 which includes price of materials and labour.

Through my own experience working on commercials, I was able to calculate the price of props, which amounted to a total of £125,000, including Prop hire and purchases.

To calculate the Crew costs, I took the standard APA rates according to BECTU.

In order to calculate a budget for the Costumes, I contacted out to various Costume designers, including (a series of Zoom calls with) Eduardo Castro, Costume designer on Ugly Betty and Miami Vice,  who informed me that my designs, it would cost approximately £375000, which includes price of materials, construction and crew.

With all of these figures totalled, I was able to calculate a final cost of £3,949,653 This of course is the price of the Design aspects alone, not including Production, Post Production and Marketing costs. 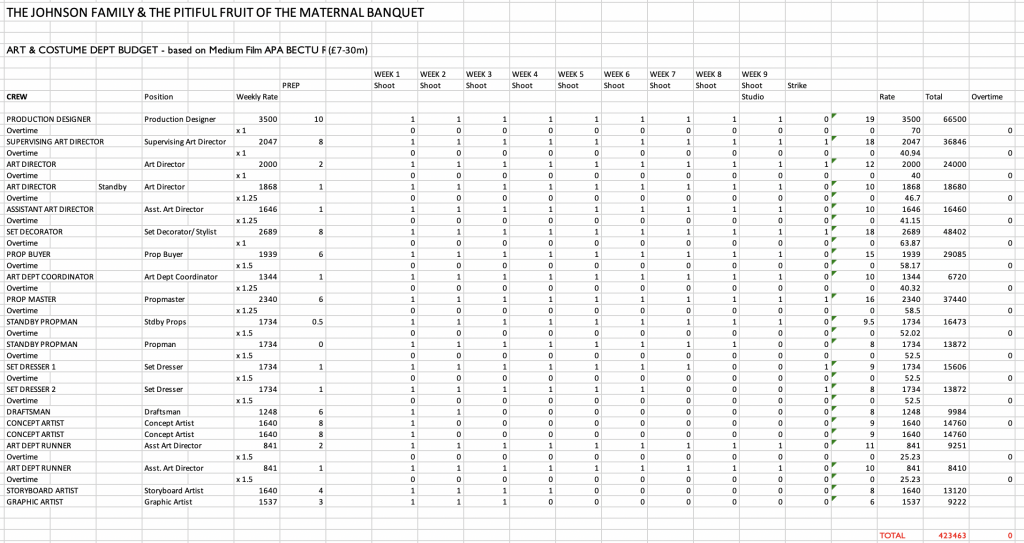 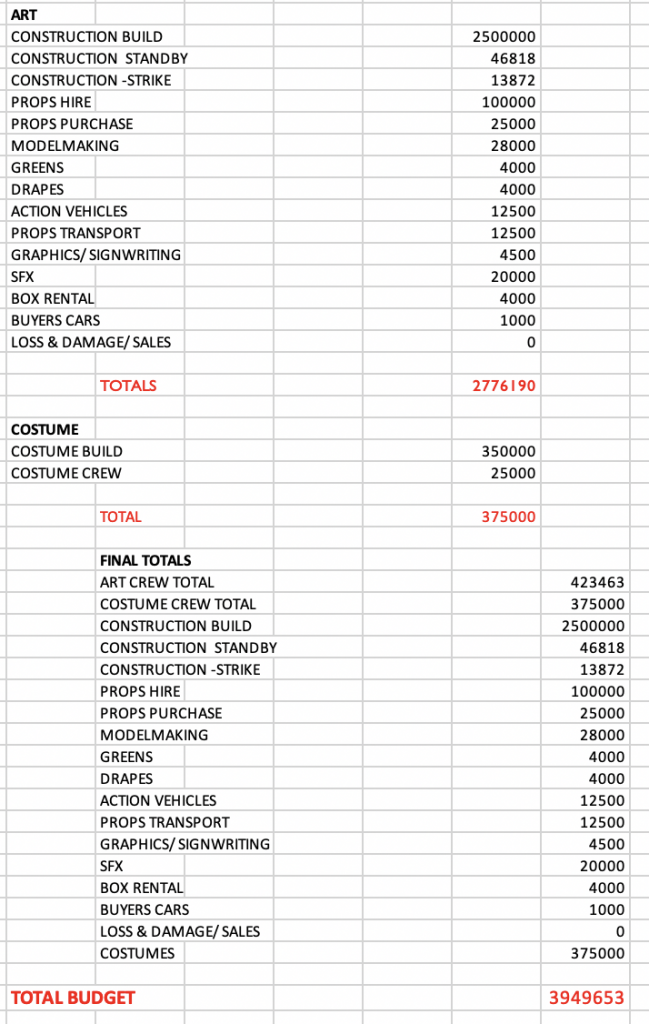 The Speculative Design project, has been a transformative experience, preparing myself to work as an industry professional, learning how to create a Pitch Package as an aspiring Director, Costume and Set Designer.

The project has given opportunity to experiment with my own Drawing style, through critically engaging with my research of large Independent studios. I have gained real industry contacts, who have provided extremely informative, personal advice and feedback on my designs and work. Many of these contacts have informed my understanding of budgeting, which will inevitably be a key part of my Design process on Professional projects after graduation.

Overall, I was proudest of my watercolour Costume designs for The Pitiful Fruit of the Maternal Banquet, where the costumes serve to build an idiosyncratic world, helping my voice as an auteur.

It would truly be an ultimate dream of mine to put this film into Production, especially if it was taken on by New Line Cinema. With this dream, I feel it is vital to continue stretching my skills, experimenting with a multitude of aesthetics and pushing myself to my limits as a director.